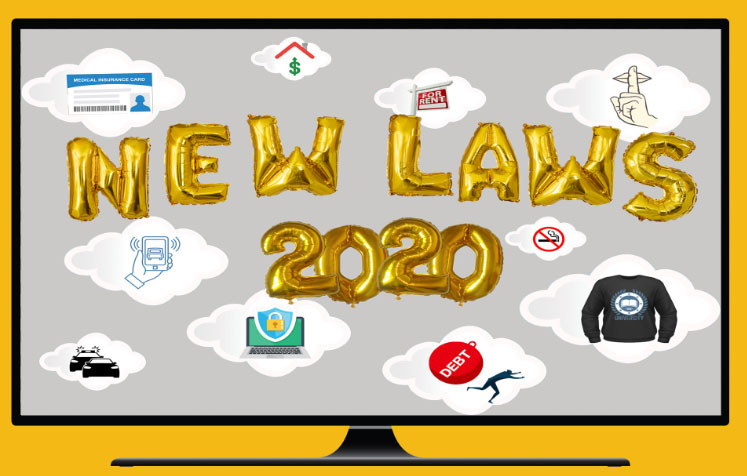 As California settles into 2020, hundreds of new state laws were enacted with most taking effect January 1. The list encompasses a wide range of eclectic topics with some standouts that are uniquely Californian. Here is a sampling of what we believe are the most interesting and pertinent.

Privacy Issues:
California will now bar both drone and other electronic surveillance where people have a reasonable expectation of privacy.

Californians will have more control over how their personal information is used and shared by companies. The law also provides for a fund to support the law’s purpose. Consumers can opt out of information sharing and request companies delete their personal data.

Environmental and Wildlife Concerns:
Trophy hunting for bobcats is illegal for the next 5 years.

California now prohibits the sale of cosmetic products with ingredients that were tested on animals after January 1, 2020. The law does not affect products sold globally where animal testing is required by law.

New oil drilling in California will be prohibited from running pipelines across any state-owned land.

Trapping animals for the use or sale of their fur is now illegal.

Any circus that uses animals other than domesticated dogs, cats, or horses is banned from operating in California. (A big win for elephants, big cats, and other exotics)

Smoking is now illegal in most state parks and beaches in California.

Any product that contains microbeads, such as facial scrubs, toothpastes, and soaps, are now illegal to sell in California after studies showed that these tiny plastics were found in estuaries and waterways.

Business Issues:
More restrictions on the use of independent contractors and more workers will be considered employees.

Minimum wage increases by $1; large companies paying at least $13 and smaller/less than 25, pay $12.

Employers can no longer require current or new employees to agree to arbitration as a condition of employment. This law is currently being challenged.

California becomes the first state to ban workplace and school discrimination based on a person’s natural hairstyle or hair texture, with the Crown Law. Protected hairstyles include braids, twists, and locks.

New parents will have more time to care for their child. Benefits under Paid Family Leave will increase from six weeks to eight weeks starting on July 1, 2020.

Payday or installment loans will have an interest cap of no more than 36%.

No more latex gloves for food service workers due to allergy concerns in some customers.

Healthcare:
New laws and a standardized form for parents who want a medical exemption from vaccinations for their children. Doctors who write 5 or more exemptions will have their actions reviewed by the state.

Californians will be required to have health insurance. Penalties for failing to enroll do not begin until April 2021.

Women seeking birth control through apps no longer have to participate in video conferencing with a health professional for a prescription.

All food handlers will now be required to take training on major food-based allergens.

California becomes the first state in the nation to offer government-subsidized health benefits to young adults living in the country illegally. The law expands the Medicaid program to include low-income adults age 25 or younger regardless of their immigration status.

Transgender youth in the foster care system will get appropriate health care. The law is the first in the country to include access to gender-affirming medical services, mental health counseling, hormone therapy and surgery.

Education:
School districts will have more power to create charter schools and new teachers in charter schools will be required to have the same credentials as those in traditional public schools. There will be a 5 year phase in for existing teachers.

Children with unpaid school lunch bills will not be denied access to at least an alternate meal, and cannot be shamed or treated differently than other students. (But then why an “alternate” meal?)

Schools must update records to reflect a former student’s name or gender if the student’s official government identification has been changed, which includes reissuing high school diplomas, transcripts, GEDs, as needed.

Students in elementary school cannot be so easily suspended for causing trouble at school. The law bans schools from suspending students in grades 4-8 for disrupting school activities or defying teachers and administrators. Students in grades K-3 already have this protection. High school students must wait until 2025 for the same benefit.

Politics:
Political text messages must include either the candidate’s name or the group that paid for the message. Some must include the names of the top donors.

Californians will now be able to register to vote or change their party registration on election day in March and November at any local polling place.

Voters may now use handheld electronic devices to help them cast their ballots at polling places, as long as they do not violate other election laws.

Marriage:
California now allows heterosexual couples to register as domestic partners instead of getting married. Currently, only heterosexual couples age 62 or older were allowed to register as domestic partners because of social security benefits. The new law could help couples with combined higher incomes avoid the federal marriage tax penalty.

Housing:
State anti-discrimination laws will now apply to renting apartments or homes through companies like Airbnb and VRBO.

An existing law which required 90 days’ notice to renters evicted from a foreclosed property was made permanent.
Californians have more protections to display religious items like menorahs or crosses outside your home. The law prohibits landlords and homeowner associations from banning the display of religious items on entry doors or door frames. The items cannot be larger than 26 by 12 inches.

Limits on rent increases: 5% plus inflation annually. Renters in cities with stricter controls will keep them and some evictions will be harder to do.

Landlords can no longer turn away a person whose rent will be partially paid with a Section 8 voucher.

Homeowners will have more flexibility to build “granny flats” or small housing units on their properties.

Criminal Justice:
Law enforcement officers can use deadly force only when it is, “necessary in defense of human life.”

The statute of limitations is extended for domestic violence felonies from three to five years.

Sexual assault evidence collected through rape kits must be submitted to a crime lab within 20 days and tested within 120 days.

California’s civil statute of limitations for childhood sexual abuse allegations has been extended for 14 additional years, allowing some to file claims up to age 40.

Operators of motels and hotels in California must provide training to teach its staff how to identify victims of human trafficking.

California inmates will no longer be charged a copay for medical care or fees for medically necessary items.

Californians now have a civil cause of action against anyone who distributes a fake sex video or photo with their likeness.

California officials can no longer sign contracts to use private, for-profit prisons.

Wildfires:
New law requires utilities like PG&E to devise plans on reducing the negative impact of planned power shutoffs to first responders and people with disabilities.

California will now establish a wildfire warning center to broaden the state’s ability to predict and prepare for wildfire. The center would rely on a statewide network of automated weather stations and fire detection cameras.

Guns:
A person banned from having a gun in another state can no longer legally possess one in California.

Employers, co-workers, and teachers will be able to ask for a gun-violence restraining order against a person beginning in September — no longer leaving the gun seizures only to families and law enforcement.

Upon Court approval, one-year gun seizures from those who are thought to pose a danger to themselves or others could be extended annually for up to five years.

Only Californians age 21 or over will be able to buy a semi-automatic rifle. And starting in 2021, all Californians will be limited to buying one of the rifles per month.